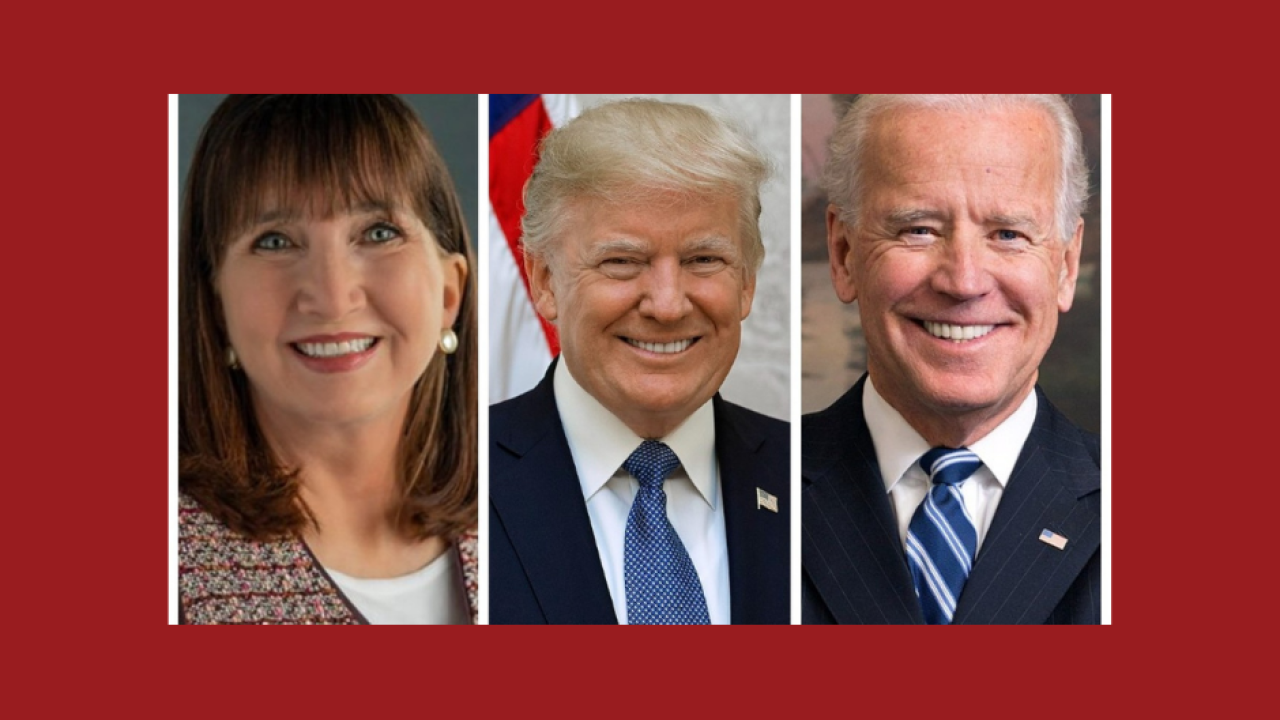 President Trump, Former VP Joe Biden and Jo Jorgenson are running for president of the United States in the 2020 election.

Former Vice President Joe Biden and President Donald Trump have very different ideas on how to fight the coronavirus if elected on Nov. 3.

On his website, Biden has a seven-point plan for beating COVID-19, including doubling the number of drive-through tests and ramping up the production of personal protective equipment.

That plan includes the following:

4. Plan for the effective, equitable distribution of treatments and vaccines

5. Protect Older Americans and Others at High Risk.

6. Rebuild and expand the defenses that Trump has dismantled to predict, prevent, and mitigate pandemic threats, including those coming from China.

7. Implement mask mandates nationwide by working with governors and mayors and by asking the American people to do what they do best: step up in a time of crisis.

Biden has discussed the idea of a national mask mandate, saying he believes the president has the authority to do so.

After restricting all non-essential travel across the U.S.-Mexico border in mid-March, Trump’s plan now focuses on reopening the country.

The White House has also called on people to continue minimizing nonessential travel.

Libertarian Jo Jorgensen has criticized the federal government’s response to the pandemic, specifically the $2.2 trillion CARES Act, which she said was “filled with waste and gave away billions in corporate handouts.”

She said too much was given to special interests and not everyday Americans.

“Multi-trillion dollar bailouts aren’t going to “create” American jobs or re-open businesses that have been permanently shuttered,” her website states.

She has even floated the idea of getting rid of the FDA in her response to the virus.

Jorgensen has called on cutting taxes for Americans, even eliminating the federal income tax altogether, which brought in more than $3 trillion to the country.

But Jorgensen said the country worked without the tax from the country’s founding until 1916 and can return to that point.

She also wants to end all federal government licensing requirements on workers and will encourage states to do the same. Jorgensen has criticized zoning requirements, saying they kill jobs and create expensive delays.

Of course, much of the growth was lost when COVID-19 hit in March.

Biden has called his plan, “The Biden emergency plan to save the economy.” It calls on using the Defense Production Act to create more ventilators and personal protective equipment for health care workers. He has also called for boosting unemployment benefits and making them get to needy people faster.

Lastly, Biden called for additional stimulus checks to Americans and forgiveness a minimum of $10,000 of student loan debts per person.

As president, Joe Biden has said he would support minorities with a small business opportunity plan, called the Build Back Better plan.

He calls for $50 billion in public-private venture capital to Black and Brown entrepreneurs. He also wants to ensure all small business COVID-19 relief efforts are designed to aid businesses owned by Black and Brown people. Biden also wants to add $100 billion in small business financing, focusing on Black, Latino and Native American entrepreneurs, after just 10% of 2019 funding went to those groups.

He has also called on more wishes for race relations in America, such as ensuring workers of color are compensated fairly and treated with dignity by increasing the federal minimum wage to $15 per hour and ending pay discrimination. He also wants to promote diversity and accountability in key leadership positions in federal agencies.

Jorgensen says people of color bear the brunt of the drug prohibition problem in the United States. She said it’s because Black Americans make up less than 14% of the population, but 40% of drug offenders and federal prison inmates, due to mandatory minimum sentences.

She’s compared the War on Drugs from the 1980s to today to the prohibition era of the United States.

She has called for decriminalizing all drugs, saying there should be no law against owning an object.

Trump said he has a four-point model for addressing racial disparities, which he discussed in June. The model calls for the following: