BLEDSOE COUNTY, Tenn. -- A Facebook post from a Tennessee sheriff led to confusion Monday about the search for a suspect in the murders of two Delphi, Indiana teens.

The Bledsoe County Sheriff Department posted on Facebook Monday morning that authorities are searching some Tennessee counties, including Bledsoe County, for suspects in the murders of Abigail Williams and Liberty German.

Williams and German went missing while hiking along the Monon High Bridge on February 13, 2017. The girls' bodies were found the next day and the families, law enforcement and their community have spent the last 11 months trying to find the person responsible.

The first Facebook post from the Bledsoe County Sheriff's Department has since been deleted. A new one says, "To Clarify this suspect HAS NOT BEEN SEEN IN BLEDSOE COUNTY or any other counties in Tn. It is a nationwide search."

Indiana State Police sent out a news release, saying the search is nationwide.

"The timing of the original Bledsoe County Sheriff’s Department Facebook post and the live airing on the Megyn Kelly TODAY show resulted in misinformation being shared on the show and the purpose of this release is to correct the inadvertent misinformation." 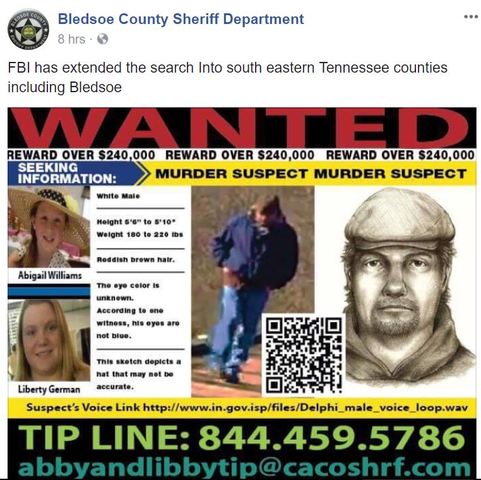 Neither the FBI nor Indiana State Police would comment about the search area.

Delphi Daughters: The Untold Stories of Who Abby & Libby Were | Delphi investigation: The latest on finding the killer | TIMELINE: The disappearance and murders of Abby & Libby | 360 VIDEO: A tour of the Monon High Bridge Trail | Delphi Daughters: Families tell their story for the first time | Delphi girls murdered: What is the evidence? | Take 1 minute for justice for Abby & Libby