An employee at a Walmart warehouse in Plainfield, Indiana received a letter saying she was exposed to tuberculosis at work -- but she never heard anything from her employer.

PLAINFIELD, Ind. -- An employee at a Walmart warehouse in Plainfield, Indiana received a letter saying she was exposed to tuberculosis at work -- but she never heard anything from her employer.

"I expect safety," the woman, who asked not to be identified for fear of losing her job, said. "Everyone expects to be safe and to go home the same way they come in. And I know that my coworkers expect that."

According to the Indiana Department of Health, tuberculosis is an airborne disease that is spread when somebody infected sneezes, coughs or talks, and the bacteria are released into the air. People infected with TB do not typically have any symptoms until the infection develops into active TB after a couple weeks.

The health department told her she had been exposed to somebody with active tuberculosis at the Walmart Fulfillment Center 6280 between July 2017 and May 2018. 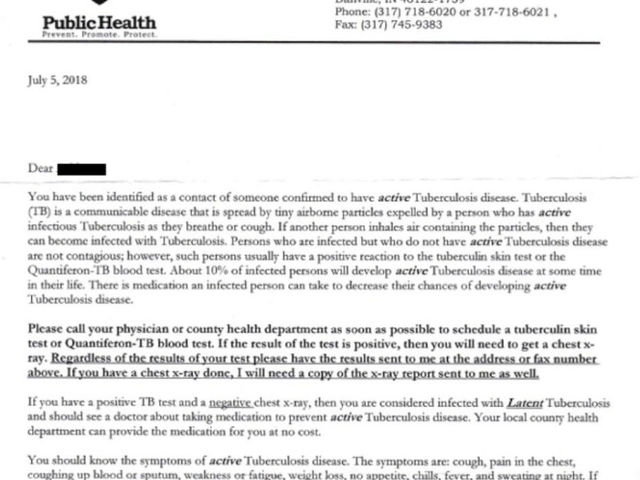 She said there was never a letter, phone call, or announcement from management about the hazard. The woman also said she knows of at least a dozen co-workers flagged by the health department -- including her husband.

"I would never want to put anyone in my family at risk," she said. "My children at risk. I know that people that I work with are scared to put their families at risk."

The woman said she has an appointment Monday to get tested. She will not be paid for the time off she has to take to get screened for the disease.

When contacted by RTV6, Walmart released a statement about the incident:

We are committed to our associates' safety and we take concerns like this seriously. We are supporting our facility and concerns raised and will continue to communicate with associates to answer questions they have.