Electric scooters back in Indianapolis

The new licenses for the electric scooter companies will go into effect Sept. 4.

Lime and Bird dropped their scooters in Indianapolis as the City-County Council discussed a regulation that would require a license and operating fees. Both companies submitted paperwork to get licensed weeks ago.

“We believe a growing, thriving City should have a variety of transportation options for residents and will continue to work with Bird, Lime, and any other companies that choose to do business in Indianapolis,”  Brian Madison, Director of Business and Neighborhood Services, said in a release.

The City-County Council's ordinance, which passed 19-6, created a license fee of up to $15,000 per year for scooter companies, plus a $1 per day, per scooter operating fee. The money raised will be used to improve the transportation infrastructure.

The ordinance also creates rules for riders including where they can and cannot ride and park scooters and a $50 fine for any violations. Riders cannot use the scooters in the public right-of-way, including on sidewalks. The scooters also can't be parked in loading zones, bus stops, shelters or on ramps leading to sidewalks.

And if you think using a scooter will get you home faster after a night out drinking, that's not true.

"You can be arrested for DUI operating one of those scooters, so keep that in mind that is not one of the alternatives to getting home if you've been drinking alcohol," Indiana State Police Sgt. John Perrine said.

The graphic from Indianapolis Business and Neighborhood Services below shows some of the rules when it comes to scooters. 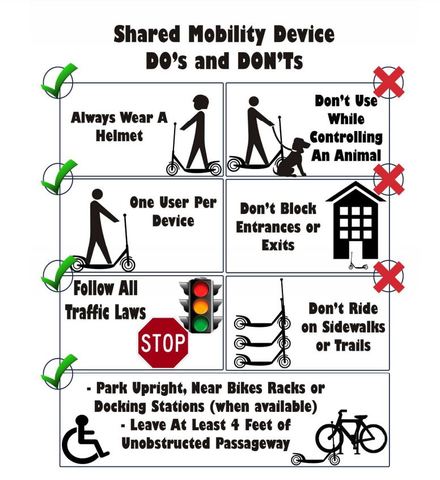