Company accused of not finishing headstones 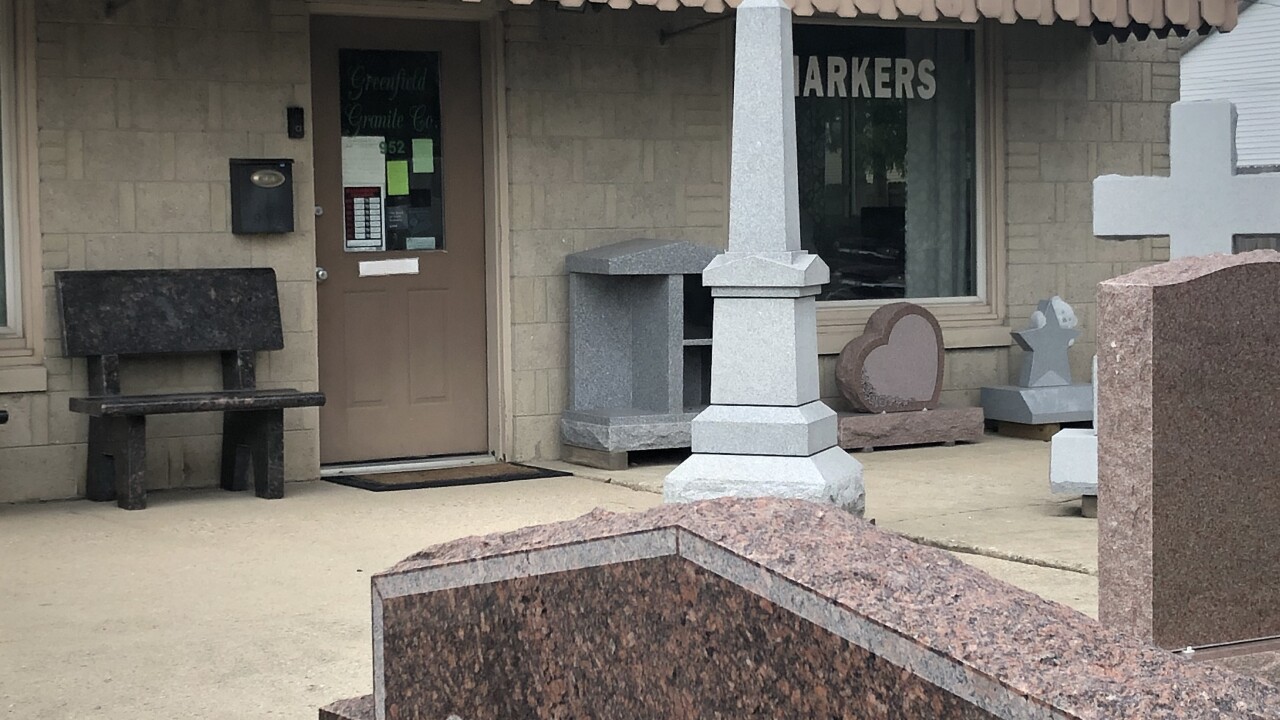 This will allow the Indiana Attorney General’s office two weeks to take an inventory of the business located at 952 W. Main Street.

The injunction prevents Greenfield Granite from liquidating, selling, transferring, or dispensing monuments, headstones and other products.

The company also can’t engage in customer sales if it cannot fulfill the order within the time period stated to the consumer.

In its request for a preliminary injunction, the Attorney General’s office included the case of Mary Collins, who told WRTV Investigates in August she paid $1,850 for her husband’s headstone but never received it or a refund.

The Attorney General’s office told the court they were concerned about the headstones and cremated remains still on the property.

“Individuals have been observed at the business property during the week of September 15, 2020,” read the complaint. “These individuals have turned away consumers searching for their monuments, but appear to be working. An injunction during the pendency of this action will prevent waste of business assets that can be used to make consumers whole.”

The Attorney General’s office is asking a court for nearly $20,000 in restitution for customers who paid for headstones but never got their stones or a refund.

In its lawsuit, the Attorney General’s office outlined complaints from at least 18 customers, including several who had been interviewed by WRTV Investigates in August — Mary Collins, Melissa Rieskamp, and Sheila Carson — and who were awaiting headstones or refunds from the company.

Some of the customers received headstones, but they were not done correctly, records show.

“We have laws in place to protect Hoosiers when businesses abandon their obligations to customers,” Attorney General Hill said. “In this case, we want to ensure that any consumers harmed by this company’s business practices receive refunds or, if they prefer, have their orders fulfilled if products remain available.”

“No one with an ounce of compassion wants to hear about a business taking advantage of grieving customers trying to achieve closure after losing loved ones,” he said.

“The temporary restraining order, or TRO, is important because it prevents the company from dissipating any assets and allows the State to assess the current status of the company,” said Scott Barnhart, director of Consumer Protection at the Indiana Attorney General’s office. “This will help determine how to reconcile this for distressed customers who never received the gravestones they ordered as they were dealing with the heartbreak of the deaths of their loved ones.”

WRTV Investigates is working to get a response from Greenfield Granite.

No attorney is listed for the company in court records.

On September 8, Greenfield Granite owner Amie Strohl, died by suicide hours before she was scheduled to appear in court to face allegations in a civil lawsuit against her.

At the time of Amie Strohl’s death, Greenfield Police had been conducting a criminal investigation into Greenfield Granite after receiving numerous complaints from consumers about paying for headstones and not receiving the product or a refund.

Tips for the Indiana Attorney General’s Office on dealing with a business:

· File a complaint at www.indianaconsumer.com

· Prior to hiring, search for criminal or civil actions at mycase.in.gov

· Never pay all the money upfront

· Hold back at least half of the money upon completion