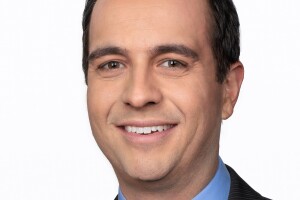 Prior to his tenure in Indianapolis, he worked at WANE in Fort Wayne from June 2000-2007. He started as a production assistant, Chyron graphics operator, and studio floor director. He eventually joined the newsroom as morning/weekend sports anchor, and also produced the Midday news for a couple years.

Brad had some opportunities to fill in as morning show news anchor and did some news feature reporting. He was a co-anchor of the award-winning 'Highlight Zone' coverage of high school football and basketball on Friday nights for nearly five years.

He is a native Hoosier: Butler, Indiana is his hometown. Brad attended Ball State University. His broadcasting career actually started while he was in high school, covering local sports in Northeast Indiana for WIFF radio and TV7 in DeKalb County.

Brad also works with the Miss Indiana Scholarship Organization. He has served as Host and Master of Ceremonies for the Miss Indiana competition since 2005. He has been a volunteer with various local organizations for nearly 20 years.